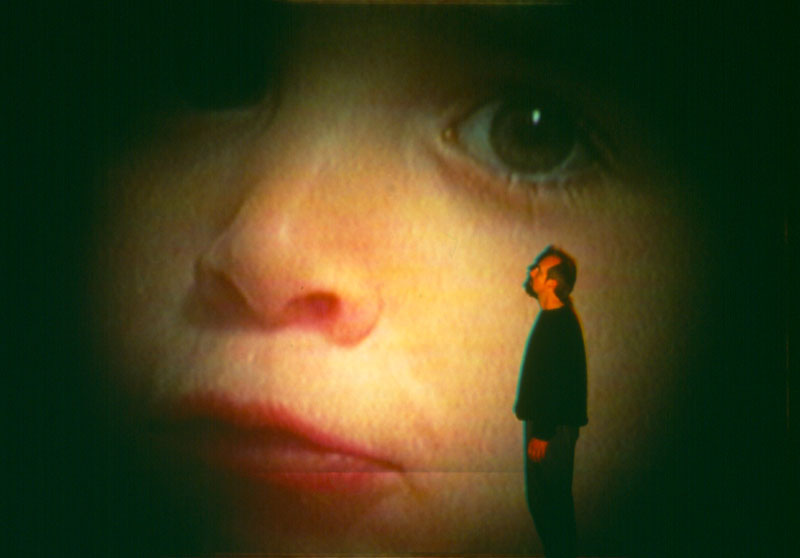 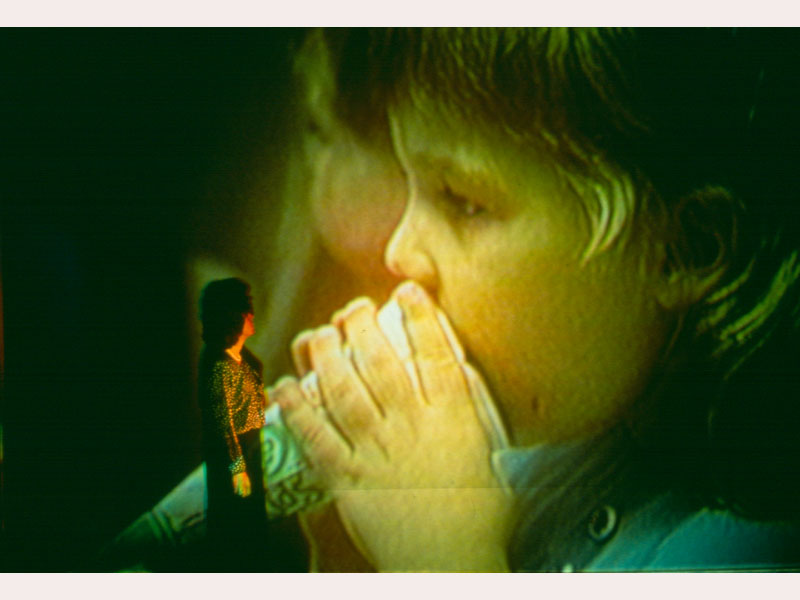 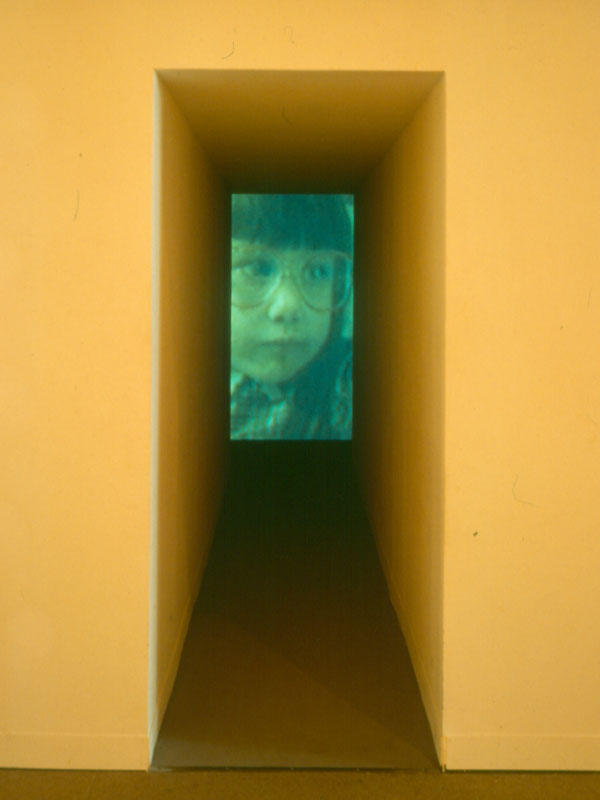 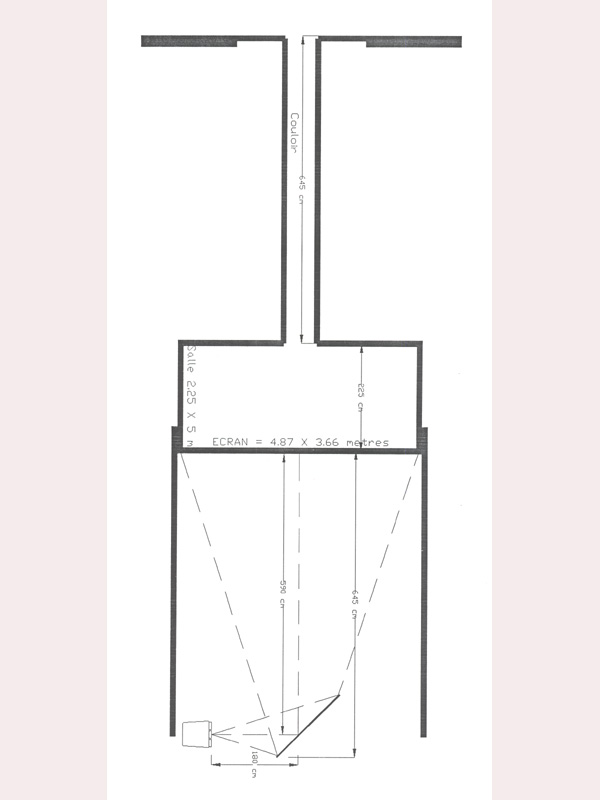 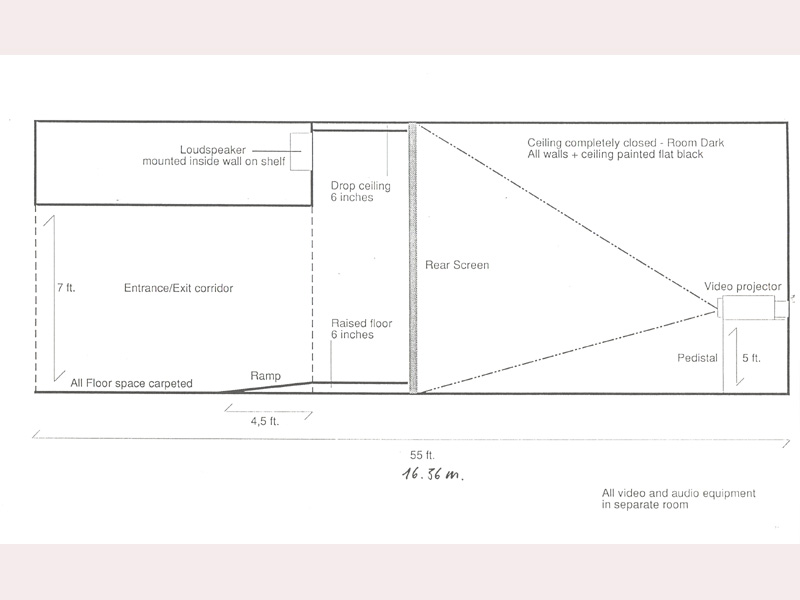 This might be the fragment of a labyrinth. One person at a time ventures along the initiatory passage linking outside and in, leading to a cul-de-sac, the space of the image. This is the first, literal passage. The other is the passage of time. The time of the image and its perception, and deployment. It is also the passage from one age to another, ritually marked by the birthday. Here, a four-year-old girl's. The itinerary of this dark passage brings us to an immense image (5 x 3.5 m) which blocks all exists and offers imaginary ways, opening up a mental passage to the body. We enter this image space as if going inside ourselves. Where perception of the world is different. The visitor is thus offered a mental and sensory experience. The screen is the size of the wall, the image “is” the wall, their edges overlap. They mingle into an immaterial obstacle. An image as architecture like a sky which cannot be crossed. The wall opposite is so close that the viewer is gripped by the projection in front of him. Impossible to go backward or forward. The distance of the eye is done away with. The body is immersed, without recourse in the image which floods the small room. A room which would be better called the depth of the image, its zone of light. In the passage, visitors glimpsed just a central fragment, but here it offers itself in its entirety but never in its totality. It is no longer subject to any cuts other than the eye's, prohibiting any overall view. It is no longer the body but the eyes which are prompted to an extreme mobility. The usual process of vision is presented and amplified. Only memory makes it possible to form an overall vision. The frame is too huge to be a useful point of reference. The off-screen is done away with and makes way just for overspills. The peripheral vision holds sway and the onlooker quickly realizes that moving would serve no purpose. He can choose a corner of the image, some kind of entrance and agree to see less in order to see more. On the scale of the image which forces the visitor against the fragment an extreme expansion of time is added, where the transition itself is evident.1 The image is drawn towards stasis and unfolds bit by bit, jolted, duplicating the very process of the eye looking at it. It is no longer the movement of the action which attracts our attention, but the actual movement of the image and the way it comes about. It is displaced, driven outside the frame like a synthetic scene explored or surveillance images caught in a permanent frame, and comes at us from all sides rushing over us, like a very slow wave. The sound, which is subject to the same deceleration, helps to keep the nervous system alert and get the image to drift. These drawn out periods of time give rise to strange silences, long deafening rumbles, and kinds of howls which belie appearances. The happiness of a birthday is contradicted by a hellish screeching. […] Whereas, hard against the screen, we can fully enjoy this loss of the usual mastery of representation, the arrangement of Passage is not negotiable. It sucks the visitor into the image while keeping him on the threshhold. […]