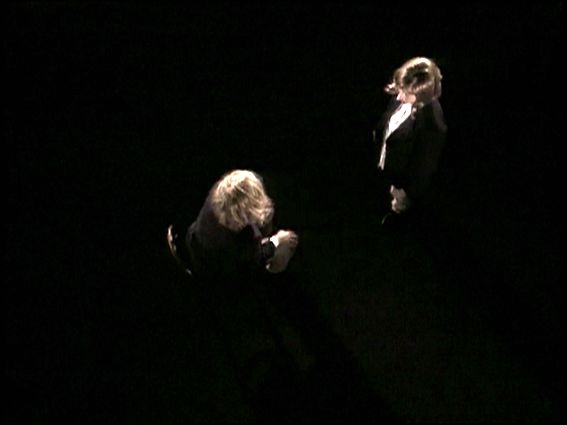 "Who is the best artist?" – that is the question.
It is posed in the form of a cross-examination between the artist and her doppelganger, or between two contradictory modes of thought, presented by the protagonists. It is repeated endlessly in a conflictual and schizophrenic manner. The frame of the image is centred on the question : shot from low angles, the actors of the drama are at the centre of the image, in a black room that reduces the space and the action to a single motivation : one character seeks to obtain an answer from the other. The position of the actors in the space attests from the outset to their relationship and hints at the subsequent conflict : one is on a chair, subjected to the question, to insults and violence, while the other remains standing, mobile and questioning. They represent the two sides of a self that is unable to be reconciled or to resolve the question – even though each time that it is posed an answer is given, it is always unsatisfactory. The names of a certain number of contemporary artists are suggested, judged, and rejected, including the name of Rosemarie Trockel herself. These names come from the list established each year by the German magazine Focus, which, based on arbitrary criteria (age, nationality, gallery and market value) establishes an annual classification of the one hundred best artists that supposedly represent the cusp of the international arts scene.
The question of seeking to know who is the best artist, played out in a metaphorical manner in this tragi-comic psychodrama, leads to other questions. What is the role of such a classification? How pertinent is it? How does this approach relate to the perception of art? What does the notion of "better" mean with respect to the essence of artworks or the realities of the art market? Is this notion even valid?