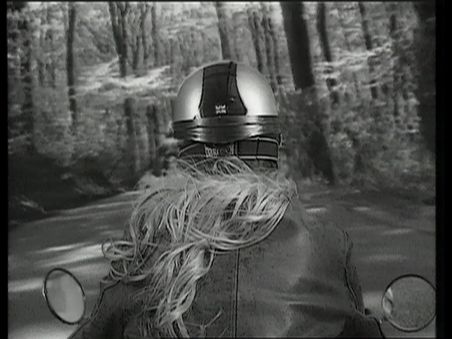 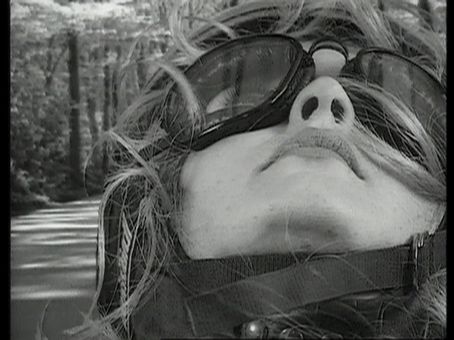 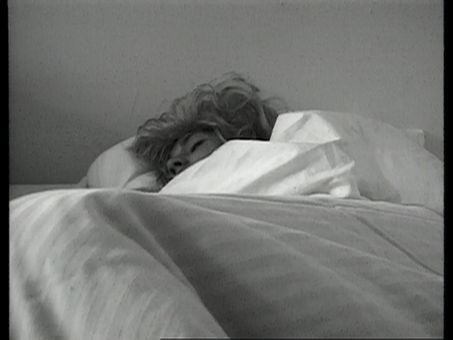 A film without speech, Hair begins with a close-up on a woman seen from behind, wearing a helmet over a head of thick blonde hair. She is part of a group of female bikers driving through a forest on Harley Davidsons, set to a melancholic piece of music by Mercer. Although the image of motorcycles more often evokes virility, the girls all have long blonde hair, the cliché of feminine adornment. The thematic of hair is recurrent in Rosemarie Trockel's work. In her drawings, it is both emblematic of femininity but also a source of caricature. Not always implanted on the skull, hair may come out of the mouth, or be spread over the side of the face, creating a strange relationship with this marker of femininity, which can thereby become a troubling or even grotesque element.The whole film plays on gender clichés by opposing and subverting them. With the aid of a crude special effect, the group of bikers appears to float across the landscape, as though detaching itself through rows of trees. This video effect places the sequence within an unreal fantasy world, and, unsurprisingly, the shot alternates with the main character sleeping, deliberately contextualising the sequence on the road as a dream image. There is a brutal break in the soundtrack between the shots of the escapade – which are set to music – and the shots of the woman in her bed in complete silence, just like the contrast between the femininity of the hair and the women's suited bodies on the big motorcycles. However, a slow motion effect of the bikers softens the hard look of the clothing and machines. Intermittently, we find the main character moving her head in delicate poses, letting her hair flow freely, in an attitude that counters the virile iconography of bikes.