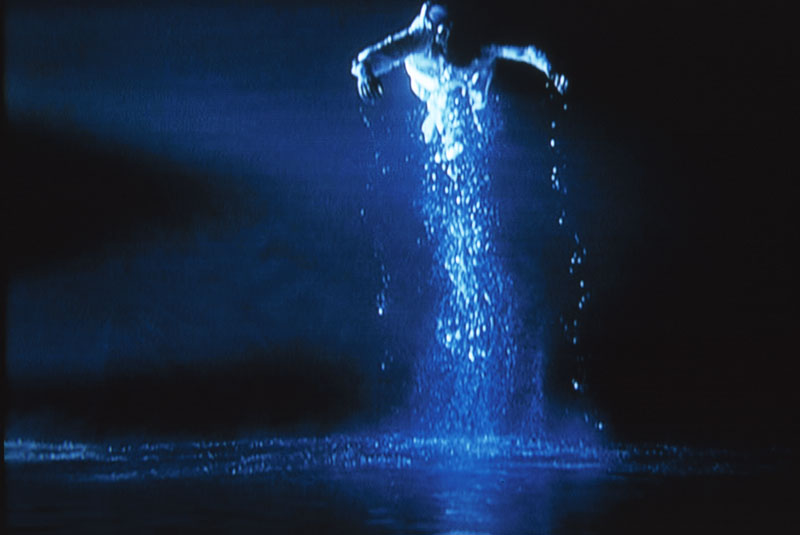 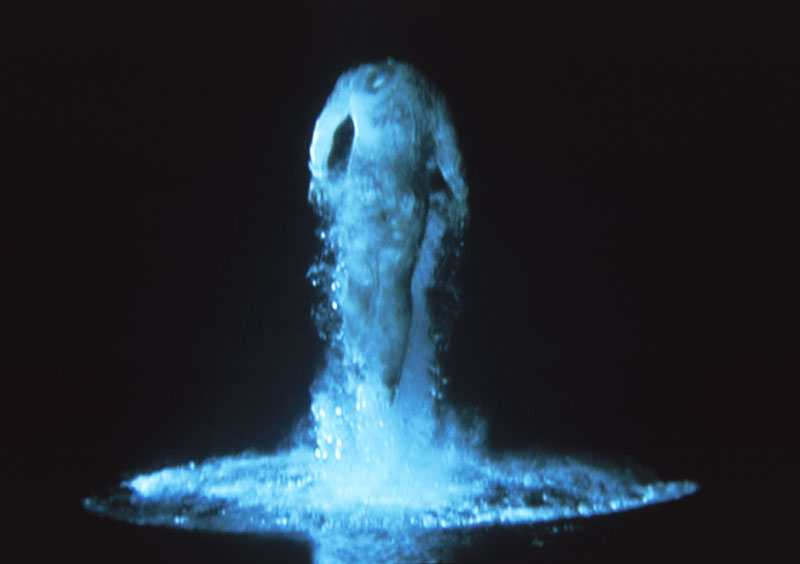 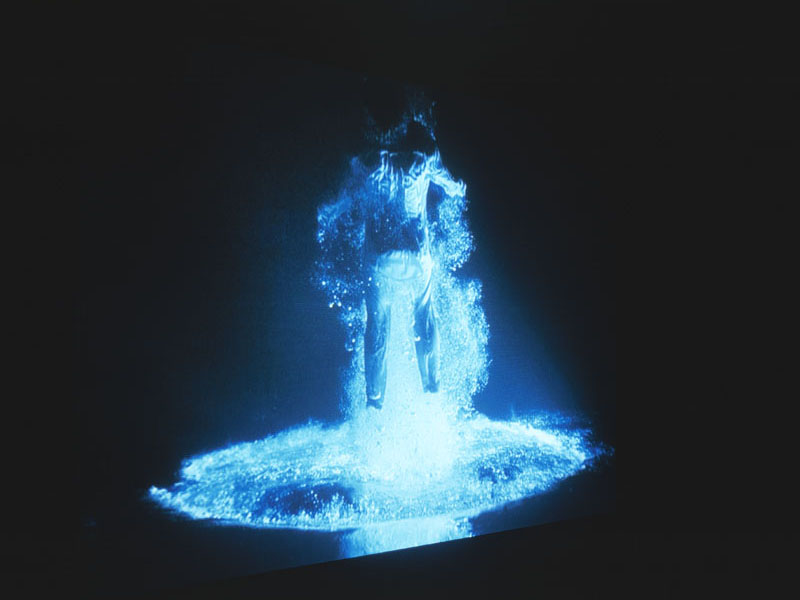 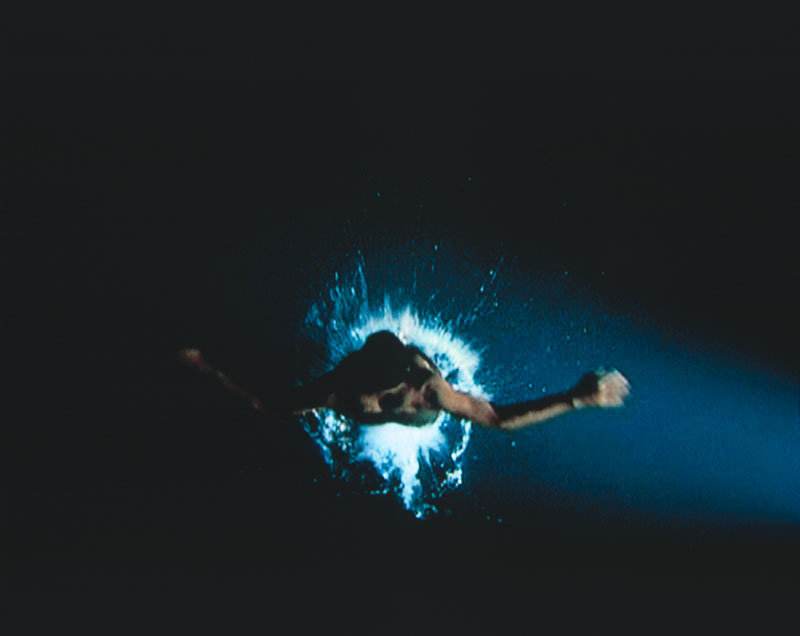 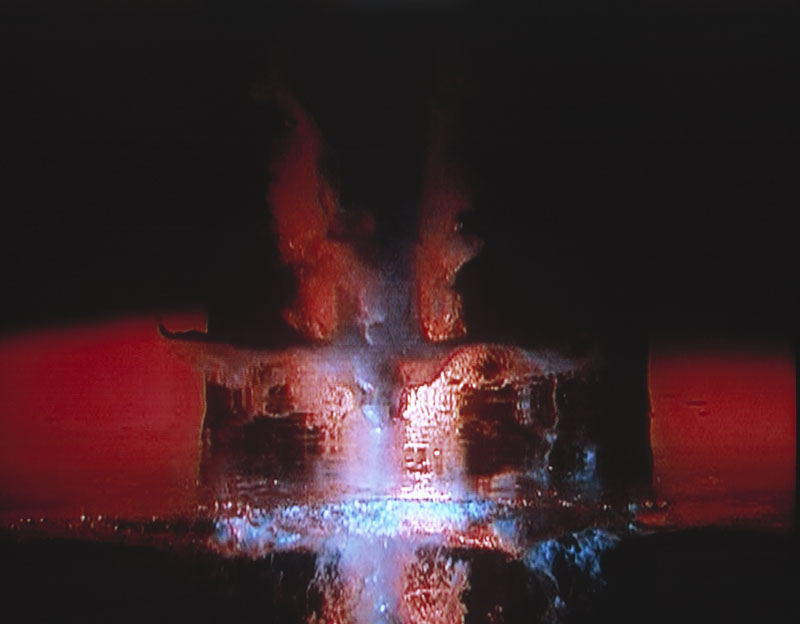 Since his earliest videos in the 1970s, Bill Viola has been engaged in an identity quest that involves a spiritual and psychological journey through his own consciousness and, by extension, the universe. Religion and art have been his guides. Beginning with Tape 1, 1972, which featured the artist, a mirror, a camera and a loud scream, Viola has probed his own psyche in video environments that involve strong attention to sound and image. Five Angels for the Millennium, 2001, consists of five large-format projections placed a few feet apart in a darkened space. The images, all of a man diving into water then rising motionless from the depths, are from film and video footage shot in 2000 for an installation called The World of Appearances. Though only one clothed man was filmed, the artist assigned him different names in each of the Five Angels projections: Departing Angel, Birth Angel, Fire Angel, Ascending Angel and Creation Angel. Viola, in his youth a self-described “electronic musician,” said in an interview with Hans Belting that “the time structure of the piece is basically musical, like a fugue. I worked the whole thing out on graph paper as a kind of visual score.” Each of the projections is seen in extreme slow motion, inviting viewers to experience time in a radically altered way. The angels appear very quickly at different, unpredictable times, as viewers scan the room waiting for one to materialize. Most often sound is what alerts one to his arrival. A sense of both mystery and danger permeates the installation. In traditional Christian iconography, angels are guardians, benevolent beings who act as intermediaries or messengers between heaven and earth. Viola's angel, a man fully dressed, is more ambivalent, however, and, whether seen or unseen, is accompanied by dire sounds or drones of unintelligible voices and other noises. Why, we wonder, is this man plunging into water and is he dead when he mysteriously emerges from the deep? That Viola's own life story is reflected in his work is no secret. He has published extensive diaries and given numerous interviews which provide significant background material for his projects. Viola's preoccupation with the power and dread of water has been exercised in many installations, most notably The Passing, 1991, The Arc of Ascent, 1992, The Stations, 1994, and Going Forth by Day, 2002, each of which contain images of a man diving into deep water. Viola tells the story of almost drowning when he was ten years old after falling off a fl oat. Of course, water also functions as one of the prime elements along with fire and earth. Viola is steeped in both Eastern and Western religious traditions and his lifelong artistic practice has involved grappling with essential life and death issues, addressing them metaphorically in brief, but powerful images. It is also understandable why Viola would be thinking of birth, death and resurrection at the dawn of a new millennium. Not one given to hysteria, he chose to deal with millennial fervor by returning to the personally charged image of a single man joining or perhaps struggling with the power of water. The dominant visual presence in each of the five projections is actually not the angel (he only appears for a few seconds), but the liquid void that saturates the videos' surfaces. The action is so slow that for long stretches of time what we see are splashes of water appearing like stars in a distant galaxy, or a dark void that once was home to a now extinct civilization. One panel is saturated in blood red, adding another enigmatic layer. The large projections are basically so abstract that they become canvases for our own fears and longings for the millennium. The “angel” is almost an intrusion on these richly filmed scenes, though it is true that we do stand in wait for his next appearance. It is, in a sense, like waiting for Beckett's Godot, but Godot actually arrives and disappears before we can engage him. Viola's Five Angels for the Millennium is so visually and aurally captivating that a viewer can't help but feel part of the installation. One's attention is constantly being pulled from wall to wall, one's body reacts quite spontaneously either to the loud bursts of noise or to the lightning-speed appearance of an angel across the room. According to Viola, “With angels the room is the piece. Your body becomes the frame, the dividing line.” This interaction between viewer and video has also been a keystone of Viola's work for many years. In his earliest work he was the performer who invited viewers into the private domain of his psychological dramas. In his large-scale installations, beginning in the early 1980s, he has placed the viewer in the middle of the action, making them co-equal with the image. One installation from 1983, Science of the Heart, contained many of the formal, spiritual and technological elements we still see in his work. Suspended near a red-covered bed is a large projection of a living, beating human heart. High speed editing makes the heart beat excessively fast, then slow to a fine stillness. Years later, in Five Angels and other work of this period (all part of his series called The Passions), Viola, now with access to high-speed cameras, film crews, elaborate sets, actors, etc. is still investigating the most fundamental ingredients of life, including breath, water, air, movement, death. His colors may be richer, his waters may be deeper, but his passions remain the same.