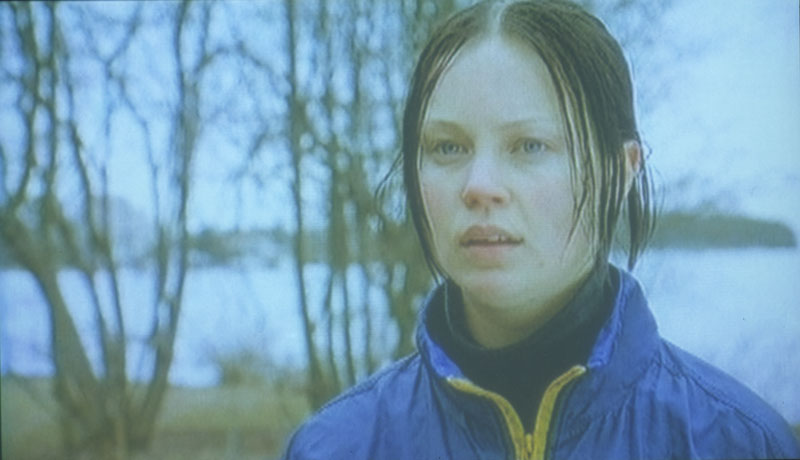 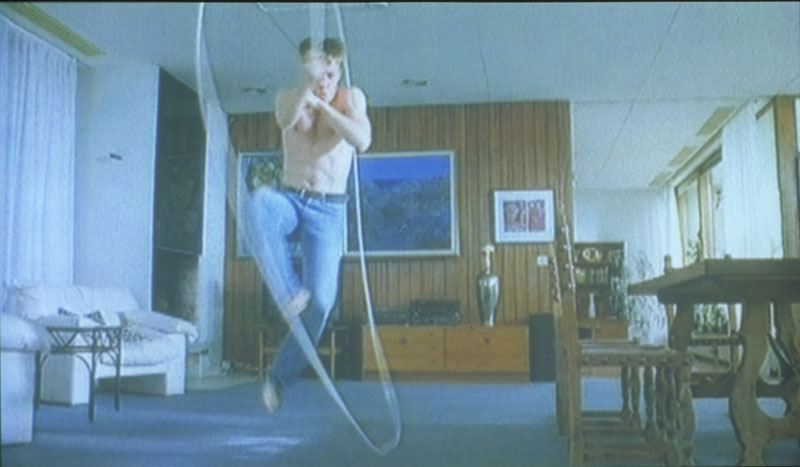 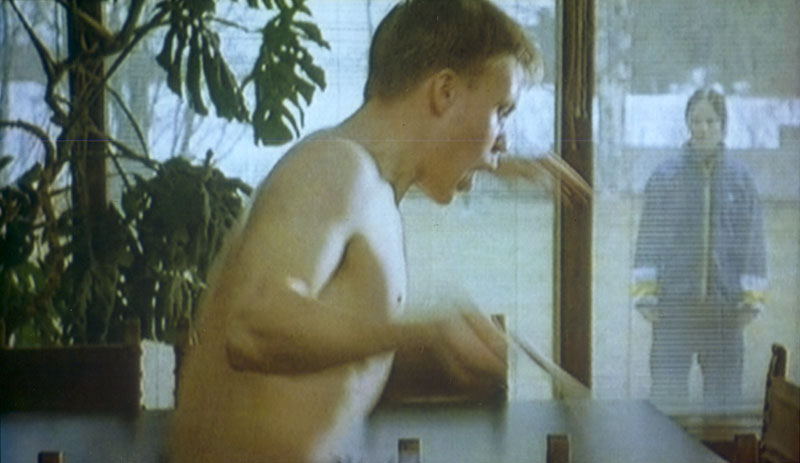 Lasso (2000) is the first of a series of three video installations by Salla Tykkä which also includes Thriller (2001) and Cave (2003). In this trilogy, the artist seeks to explore the passage to adulthood in the form of short narrations around the character of a young women at different stages of her life (teenager in Thriller, young woman in Lasso, adult in Cave).

Lasso, like the other two parts of the trilogy, is the translation of a non-encounter into image and emotions. A young woman comes back from jogging and heads towards a modern house in a comfortable suburb. She rings the doorbell but no one answers. Making her way around the house, she approaches a large window and peers inside. At first she only sees her reflection on the glass but then, between the slats of the blinds, makes out a young boy clad only in a pair of jeans who is working out with a lasso in the living room.

As the music gets louder, we see the boy twirling his lasso more slowly, taken by the sound of the rope whipping the air. The girl watches him for several minutes but he doesn't see her. This intense observation, full of emotional tension, suddenly comes to an end when the boy cracks his lasso on the floor with a thud. The girl pulls back, her face wet with perspiration or tears, leaving the trace of her breath on the window. The camera then moves away from the protagonist with a pan that winds up on what remains of a pile of snow on the lawn.

The two characters will never meet each other. According to Tykkä, “The story tells about the relationship between these persons, their worlds. It is also an attempt to describe differences between reality and the imaginary world we are building to protect us.” The girl has the power to watch the scene but not to participate or to understand it fully. The impossibility of communication between the girl and boy, materialised by the window, a recurrent symbol in Tykkä's work, is total.[1] She is outside, he is inside; she sees him, he doesn't see her; she seems fascinated by what he's doing, he is entirely caught up in himself, concentrated on his gestures, shut off in his world. But the atmosphere of the film is still not oppressive; the literally hypnotising vision of the lasso's slow-motion dance and the spellbinding music set off a sharp emotion in the viewer. The music, the Ennio Morricone theme which opens Sergio Leone's spaghetti Western Once Upon a Time in the West, is at once poignant and kitsch, reflecting the profoundly intimate and emotional nature of the work.

The girl who observes this scene stands in for the viewer, whose gaze similarly combines voyeurism and fascination. The frontal gaze of the girl and the viewer makes the room observed into a performance stage, with the window creating a separation between two different levels of reality.

In the absence of words, meaning is created uniquely through image and sound, leaving considerable room for the implicit and the unsaid. The viewer does not apprehend the work reflexively but emotionally. The expectation created by this situation will never been fulfilled; only the pile of snow, followed by a white screen, offers a virgin space for viewers to project their desires.

The use of film codes from a popular genre and the subversion of its values (in the Western, as in Western society in general, it is the man who regards the woman's body with a voyeuristic eye) give the work great force and permit it to overturn traditional schemas in order to construct a feminist discourse. [2]

[1] . The window plays a capital role in Thriller, as well as in the photographic series Pain, Pleasure, Guilt.

[2] . “I am a feminist and that is part of my working process. I have been looking at female roles in different film genres. It is interesting to understand how these social and political structures are deeply built in our consciousness and how much people remember things that have seen or heard. In my work I try to change the roles and traditional ways of seeing and hearing.” Salla Tykkä, Boiler (March 2002).

On Tykkä's feminist discourse, see also Bernhard Fibicher's article in the catalogue Salla Tykkä which accompanied her exhibitions at the Kunsthalle in and the BAWAG Foundation in in 2002.